What I see when I look at you: a love note

I have never been a big comic book fan. When I was a kid, I wanted to read "real" books. "serious" books. So comics were not part of the equation. Plus, I have an addictive personality, so that would be one more thing on which to spend money I didn't have.

So this whole resurgence of comic book films has been fun for me - to explore the heroic stories of these legendary heroes (many of which I wasn't remotely familiar with before the films). I'm one of those people comic book purists probably hate: I didn't read the books before I watched the movies.

Before this resurgence, the closest I could identify to a superhero was Wonder Woman - you know, the Lynda Carter version (again, never read the books, y'all!). She was something for my pre-teen, 80's self to look up to. But as an adult, I felt more drawn to action heroes like MacGyver, Jason Bourne, and the like.

I admit, if it hadn't starred Chris Evans, I probably wouldn't have thought twice, but he seems like one of those really nice guys in Hollywood, so I went to check it out.

It just gave me another reason to love Evans. It also gave me a new hero.

One that reminded me of you.

In the movie, Steve starts out as this gangly little weakling of a kid (oh, and did I mention, he's an artist, too?). Through the miracle of "modern" science, he becomes Captain America.

But the core of Steve - that which made Captain America - was there from the beginning.

This is what I see when I look at you.

I was working on Pinterest lately, crafting a branding board for a client project, and came across a pin of this painting:

Here's little Steve, with all his heart, hustle, and commitment to the cause - regardless of his size or stature. He knows the person he's capable of becoming, even if the rest of the world doesn't see it yet.

Then, there's Captain America. He TOWERS over little Steve, yet, he's the same guy. The same heart. The same hustle. The same commitment to his cause, his beliefs, and what really matters in his world.

They are the same, even if the world doesn't always see it that way.

But that is how I see you.

I see you when you show up in your "small" self, just wanting to bust out. Ready to jump on your metaphorical "grenade" to save the lives of the people that matter most to you. I see you striving to be as big and strong as you know how to be. I see your "Captain America-ness" trying to burst out of you.

I see your potential - in all the various ways it can manifest: strong leader, successful business owner, deeply spiritual human, loving spouse and parent. I see your struggle for balance, your desire to win - but win something with meaning. To have a meaningful life, a beautiful living doing what you love in ways that inspire the world.

THAT is how I see you.

You don't need some crazy serum concocted by a mad scientist to get to where you want to be. That's just the window dressing that makes it easier for the world to appreciate who you already are. Steve was Captain America all along. The world just didn't know it yet.

I know what's inside you

I've seen it. I see it every day. I've lived it. I've had to look my own potential in the eye every day. Sometimes I see Steve. Other days, I'm clearly my own Captain America.

But it's all there, all the time. I know it, because I've lived it.

And I see it so clearly in you.

I do. And I'm grateful to be part of your journey of awesomeness. 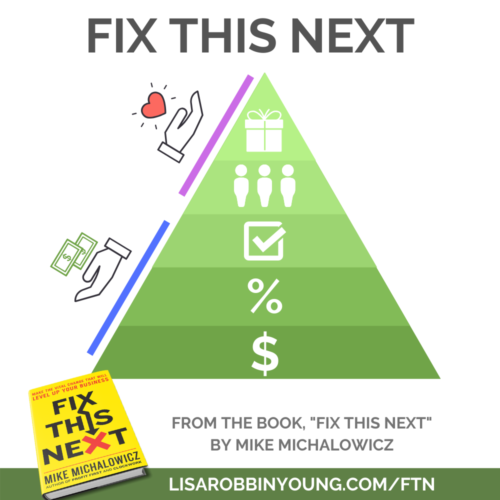 This is bonus episode 6 where we begin our conversation about the Business Hierarchy of Needs and the lowest level of the hierarchy: Sales.

The Business Hierarchy of needs is a concept developed by Mike Michalowicz, author of the upcoming book, Fix This Next. I'm a certified Fix This Next advisor, licensed to share this information before the book launches.

Read More
Too many projects, but not enough money? 5 tips to fix that fast.
Lisa Robbin Young

As a recovering overachiever, I've learned a thing or two about spinning plates. In fact, some might call me a pro. I can't count the number of times I've heard someone say: "Damn, Lisa! How do you manage to get so much done?" "Lisa, you are EVERYWHERE! How do you do it?" "You seem like you've […]