12 lessons "The Princess Bride" taught me about owning your dreams I remember it like it was yesterday. 4th floor of Darrow Hall, BGSU. A throng of students were piled into and onto my friend Angela's futon "loft" bunk bed. She had the coolest room (and furniture) in the dorm by far, and there had to be at least twelve people crammed into that little shoebox room. I was late to the party and everyone was camped around the TV set watching "The Princess Bride".

I got there just as the sword fight was beginning. I'd never seen the 1987 movie before (it was considered a "classic" by 1993 - don't judge me), so I was asking questions trying to get up to speed. Mesmerized by the hypnotic choreography and delicious one-liners ("get used to disappointment"), I was shushed more than I was answered.

By the end of the film, however, it had become one of my all-time favorite movies. I still randomly quote passages from the movie on facebook just to see who is paying attention.

Little did I know that some 20 years later, that movie would become not just a quintessential classic from my young adulthood, it would also teach me a lot about life, and specifically, about pursuing my dreams.

In the spirit of Bec Oakley's post, here are 12 lessons I learned from "The Princess Bride" if you really want to go for your dreams.

1. "You rush a miracle man, you get rotten miracles."

Stuff takes time. And just because you're not where you think you should be, doesn't mean you're not where you need to be. It's a hard-won journey to cross the eel-infested waters, scale the Cliffs of Insanity, and brave the Fire Swamp to reclaim what matters most to you. Even Dorothy couldn't click her heels together until after the journey was over.

2. You can survive any Fire Swamp, if you pay attention to your surroundings, and don't go it alone.

Whether you're a local fisherman out for a pleasure cruise and spot a shrieking eel, or you're unequally matched against a giant, the person that pays the most attention always wins. When you hear the popping noise, you know the flame spurt is coming. Trust your support team (mastermind, coach, partner) to help you find the lightning sand, and fight off the Rodents of Unusual Size (any unwieldy problem, really). You'll have a damn-near impossible time making it through it all if you have to be responsible for every little detail. Ask for help - then accept it with grace.

3. Just because you know the secrets of the Fire Swamp doesn't mean you should live there.

Everyone faces hurdles, obstacles, and crap in their journey. Wallowing in it just keeps you from your ultimate desire. Fight your demons, battle the bad guys, and get on with your story. A corollary: just because you've got an idea that works, doesn't mean it's the best course of action.

4. Iocane Powder is real. We call it FEAR.

Fear is "odorless, tasteless, dissolves instantly into (our minds), and is among the more deadlier poisons known to man." And you can build up an immunity to it, but it often takes a few years.

5. "Never get involved in a land war in Asia" - or anywhere else.

If you spend all your time fighting over territory ("Someone stole my great idea!"), someone else will slip in and achieve victory while you're licking your wounds. Keep your eyes peeled for new, better opportunities. Trust me, there's always a way if it's meant to be. Sir Richard Branson said that "business opportunities are like buses. There's always another one coming." The same is true about pursuing your dreams. Forget about how to make it happen, and just pursue your dreams determined that they will come true.

A corollary to #5 above. You can get pissed about someone who stole your thunder (and try to rain on their parade), or you can build a bridge and get on with your life, focusing instead on how you can improve yourself and make an even better showing next time (because there's always a next time). If you get known as someone who's difficult to work with, people won't work with you unless they have to, and even then, not so much.

Pain is a powerful motivator - for both good and evil.When Westley described what "To the pain!" meant, I remember watching Prince Humperdink slowly back down. Pain - especially perceived pain (which smells a lot like Iocane Powder) is a strong motivator, and can leave you bound to a chair, alone with your cowardice like the Prince, or towering over your greatest adversary like Inigo, reminding the 6-Fingered Man "you killed my father - prepare to die" - even after you've been stabbed repeatedly. Ultimately, pain can be used to empower you or disempower you. The choice is up to you.

...and the corollary: "Life is pain, anyone who says different is selling something".

It is not all rainbows and Unikitties up in here. You're going to face obstacles and hurdles (you read the first half of this list, right?). Pretending they don't exist is like playing on Count Rugen's torture device. It will easily suck many years of your life away. Even the Albino can't help you if you fall for the "magic pill" being peddled around the internet (and points beyond). Well, except for Miracle Max's pill... which even he didn't believe in... which brings me to...

Mostly dead is slightly alive - which means there's hope. Hope is a LOT of hard work. Miracle Max and his wife HOPED that the magic pill would do the trick (they couldn't wait for full potency, you know). Inigo and Fezzik HOPED that the man in black could help them storm the castle, but without action (swallowing the pill, lighting up the holocaust cloak), they weren't going to see success. When you've got even the smallest win - perhaps a little head jiggle when you've been mostly dead all day - you've got to celebrate it. It pays to see every asset you have as a small victory.

And sometimes - as Westley points out - we're our own worst critic. We can't even acknowledge the progress we're making because we're "not enoughing" it to pieces. Celebrate even the smallest wins despite the naysayers  - or even when you're the nay-sayer! If you're especially myopic, let your support group help you identify and celebrate those wins together. Huzzah!

11. Your reputation precedes you - craft it carefully.

People feared the Dread Pirate Roberts, not the Dread Pirate Cummerbund. Count Rugen was nothing more than a coward with six fingers, but his reputation preceded him. And Buttercup, in all her glorious beauty and purity saw herself as a fraud and the "queen of refuse" in her dreams. Once unleashed, our reputations can take on a life of their own. If not managed properly (Kim Kardashian or Miley Cyrus, anyone?) it can be our ruin. A great reputation takes time and nurturing. Do the work. It's worth it.

I believe in Divine Alignment. I believe with all my heart and soul that if there's something that you truly love, that you were truly meant for in this world, it can happen for you. Maybe not in the way you imagined (probably better). Maybe not in the time you imagined (usually later). But it happens. I've seen it too many times. Divine Alignment makes everything move like a greased pig - fast. Take time to prepare. When things hit rock bottom (been there), when you feel like you're almost dead, remember you're NOT dead, and your dreams are just on standby. Then, pick yourself up, dust yourself off, and find that wheelbarrow you put over the Albino! 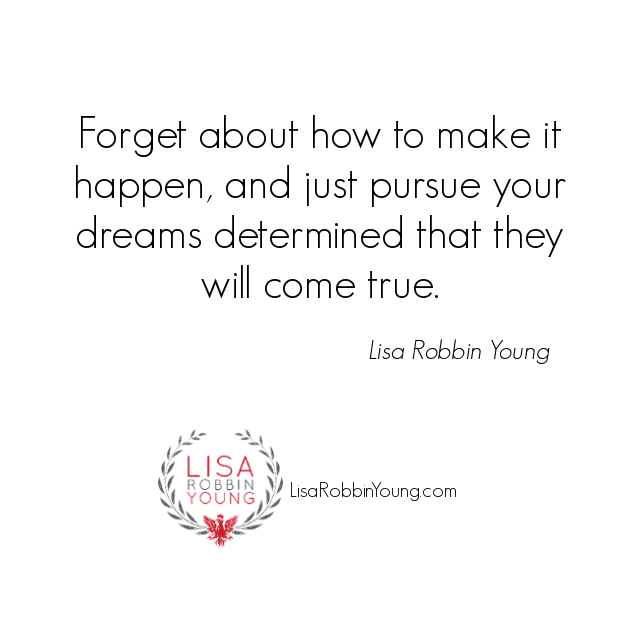 You ARE The World's Best
Lisa Robbin Young

A powerful reminder from Mike Michalowicz, author of The Pumpkin Plan and The Toilet Paper Entrepreneur.

It may sound silly to you if I asked “what does your business taste like?” or “if your business were an animal, what would it be?” And yet, these are not uncommon questions to ask in the branding process. While there's not enough time and space to develop your brand in a post like this, here are some things to keep […]