Ready for an upgrade? Ask yourself this question first...

We're a few episodes into the new season of Creative Freedom, and I'm giddy at the overwhelmingly positive response at this season's show. Fingers crossed I don't jinx anything along the way.

Getting to this point wasn't easy. As I alluded to in Episode One this season, I took a LOT of time off. The last show of Season One aired near the end of August. That's almost a year between episodes, and I'm sure that at least one person thought I wasn't coming back.

Well, I'm back with a vengeance, and an upgrade to boot. But not every upgrade happens with ease. In fact, most of the time, there's a desire to upgrade BEFORE you're ready to actually take the plunge. That's what happened to me.

Here's this week's episode to give you the glossy version. Read on below for the juicy details.

I wanted to upgrade, but I wasn't ready.

Creative Freedom was actually born from a video challenge that Jason Stein and Rachael Albers launched in a facebook group. I knew I wanted to do more video, but I'd been stalling, and the Wisdompreneurs video challenge was a perfectly-timed kick in my pants to get things going. So I did.

But then life happened, as they say, and by August, there was too much on my plate to keep up with a weekly series. So I pulled back, took a hiatus, and spent time trying to figure out what I really wanted to do next.

As a business consultant to creative entrepreneurs, one of the things I teach is to build your business around who you are and what works for you. I thought it fitting to practice what I preach.

It didn't take long for me to decide that I wanted to do another season. I enjoy video, because it's a chance for me to "be on stage" and help people at the same time. But sitting on a yoga ball in my living room didn't leave me feeling like my best self. I wanted better audio for sure, and hopefully a set upgrade. Then, we decided to buy a house, which meant packing up everything and relocating it. So even my makeshift "set" wasn't going to be available for filming.

We moved and, in the process, I thought I was going to get an office - a studio where I could set up and film a show with better production values. I started painting, and sharing my progress on Instagram. It was exciting to watch the process unfold.

And then life happened again, and my teenager moved back in. He needed a room, obviously, which meant the office was a no-go. It's all good. I set up a mini-office in the fireplace room:

For the most part, it works well, and since this photo was taken, I've added another level of shelving (milk crates ROCK!). But it still doesn't give me a viable space in which to record video. In fact, when I do webinars, I often move over by the window, which works for up-close, talking head-style videos, but doesn't give me the ability to be my fun-loving, arm flailing self.

That, and there was simply no room for my fancy lighting set-up. Last January, I invested in softbox studio lighting so I could film better quality videos. They have a small footprint, but they still take up space, and the angle of the roof in the new house doesn't allow me to get the lighting up high enough to be effective.

So my friend and mastermind buddy, Pam offered to store my lights at her place. And then, in a stroke of supreme generosity (or madness, I'm still not sure which), she agreed to let me film this season's episodes at her place. It's an entire floor of studio space, with plenty of room for everything I could possibly need. I could bring the Damn Whippersnappers into that space and do a show, it's so huge.

I got way more than I bargained for... in a good way. I wanted to upgrade, sure, but I had no idea the Divine would bless me with something this awesome.

Still, I wasn't ready for it.

The first season of the show was recorded a bit more, um, on-the-fly, shall we say? It was not uncommon to script, film, edit, and upload the video in a single day. But now, I had to develop and coordinate a shooting schedule. That way, I could film multiple episodes in a single day. It would be impossible, not to mention rude, to just show up at Pam's house and say "Hey! I had a great idea for a video today, let me in so I can film it!" 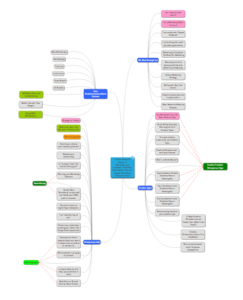 Instead, I had to be more intentional. I developed a slate of episode ideas for the entire season. I think there are about 45 or so topic ideas on the mind map you see here, in various stages of completion.

Then, I had to script and rehearse each episode before filming. I also had to collect my makeup, wardrobe, video and audio equipment, and any props I'd need for filming, since Pam lives a few miles away. I couldn't just run back home if I forgot something. That meant developing a checklist to make sure I always had everything I needed when I got to Pam's for a day of filming.

Getting there was only half the solution.

Once I arrive at Pam's, I've got about five hours to get it all done. Why five hours? Because I have a kid that gets off the school bus and I've got to be home for him! During the summer, I have more flexibility, but I still want to keep my shooting time tight, to keep my costs low. Pam's "doing me a solid" right now, but one day, I  may need to rent studio time, and that has a cost.

Just because it's free now doesn't mean it won't cost later. Being efficient always pays off. (Tweet this)

I set up and test all the equipment.  It takes about an hour to set up the lights, get the balance right, and test the audio gear. I am a one-man camera crew for the most part, so it's up to me to make sure things work properly. Sometimes the lights are a little too hot, and I might not catch it until after I've filmed everything. Oh well. Next time. #ProgressNotPerfection

Once everything's up and running, I have to make sure my hair, makeup, and wardrobe work well and actually shoot the videos. I wish I could say that every video happens in a single take, but that would be lying. Shooting the end of this episode took me over an hour - so I only filmed three that day.

I can usually shoot 4 episodes per session. Then it takes about 30 minutes to pack everything up and get ready for the drive home. Why five hours? Because I have a kid that gets off the school bus and I've got to be home for him!

Now I've got a handful of videos that need to be edited, posted, scheduled, and ready for broadcast. Yep, I do that, too. But like I said I enjoy video, and since I'm a Fusion type, I actually do a fair job at it. Plus, I'm not so busy yet that I feel the need to hire it out.

You may be ready to upgrade, but can you maintain it?

I'm familiar with filming so most of this wasn't news to me. The only variables I didn't know about related to how long it would take to set up and test the lights and sound, but I've done a lot of tech rehearsals for theater, so I had an inkling. Yes, this is a LOT of effort, and I wasn't sure that, once I dove in, I'd be able to maintain it.

Frankly, with everything else going on, I wasn't ready to assume this much responsibility before winter was over. We were moving, and yes, the divorce is happening. Had I launched season two in the middle of all of that, I probably would have had a mental breakdown. I wanted to create a new normal, and in order to do that, you have to be ready to maintain it - or it isn't normal, is it?

What do you want to upgrade? What's waiting for you on the other side of your next upgrade? Are you READY for that new level of responsibility? Share your thoughts and ideas in the comments, and be part of our Rising Tide Community.

This week marks the beginning of some shifting in both my life and my business. We finished our taxes, and the kids were home for the holiday, so I decided to slow things down a bit and not "push" myself to create. I explain it a bit more this week on "The Convo":   If […]

Read More
All You Need Is Love
Lisa Robbin Young

This week's song is a cover of a classic by The Beatles. "All You Need Is Love" was written to be a mantra-style piece - sort of like musical brainwashing. You hear the refrain over and over, with a march-style feel that gives it an almost militaristic, "drilling it into your head" sensation. I've yet […]