[Editor's note: when we migrated to the new site, a lot of great posts got lost. Slowly, I'll be digging them out, updating them, and reviving them for your inspiration. So if this post feels strangely familiar, that's why.]

This past year, I've been not-so-covertly working with Karl Staib on his twitter parties. He's been helping best-selling authors like Danielle LaPorte and Jennifer Louden sell more books and reach new audiences through a blend of teleclass and tweet chat that he calls twitter parties. My role is to manage the conversation on twitter and award prizes to the participants at intervals throughout the party, while he handles the interview and conversation on the phone.

Basically, I get to play fairy Godmother, talk to people and give away free stuff. Tough job, huh?

A while back, he did a twitter party for Barbara Sher, author of "Wishcraft". On the call, she was talking about a client who wanted to sing. Barbara told her to sing. When the client expressed her concern about her weight being an impediment to her singing success, Barbara simply told her to "sing fat". She followed that revelation with this comment:

"There are a lot of fat singers."

After a failed attempt to audition for a TV show in early 2012, I found myself co-writing, co-directing and co-starring in a Christmas musical at the end of the year.

The odd thing is that I have relatively little difficulty standing in front of the camera to teach a business concept, or share wisdom from my kitchen. I throw on a blanket or a winter hat when I'm sick and just go with it. But when someone asks to SEE my body shape in a video... well... AWK-ward!

Then the book launched, plus I spent part of the year recording and sharing tunes with my... fans.

I think that's the first time I've ever used that word to describe the people who actually want to hear me sing.

I can't rightly call them family - because only a handful of people I'm related to have listened to the new music yet. I can't call them my subscribers, because some of them aren't. They're also not all close friends. But the one thing they have in common is a willingness to listen to my music - and many of them are enjoying it!

This is also the first time I've openly shared my work for feedback before completion. And now, I've committed to recording 300 songs this year. Why?

I am owning who I am, rather than relying on approval of others in order to create my art.

Did you hear that? That was me, silently freaking out in my own head as I typed that "out loud".

It was one part "Hell yeah, it's about time!" and "Holy crapballs! What did you just do?"

I sing. I write music. I am a performance artist. That naturally means there will be people who like it, as well as those who do not.

That's as it should be. I don't create for others to consume it, although I want them do. I create it because it speaks to me, and because I can't NOT do it. Some things are worth doing whether or not there's a financial return on the investment you make - because some returns are GREATER than money.

And I feel guilty, embarrassed, and ashamed that I've kept it in a box for 8+ years.

But without the applause, sometimes you're not confident that you have what it takes to create.

I have a friend from high school named Joe. When he was in town (from Chicago, where he now lives) he did a photo shoot with me. He's pretty darn talented - even though he claims not to be a "professional". The photos of me on the site? Joe did that.  'Cause he's all awesome and stuff (I love him so much, I put his link in the footer of the site!).

Joe didn't wait until he had some kind of mondo professional set-up to have the courage to do what he loves. He just did it. He experimented. He put some ideas out there. He listened to me, but he didn't change his vision for the work just because I made a suggestion. He did HIS thing. And the results have blown me (and many others) away.

Joe decided to sing fat. Or in his case, take professional quality pictures despite being "an amateur".

As your inner critic speaks to you, nags at you, and tries to convince you that you don't have what it takes. Remind yourself that you may not have everything that it takes, but you've got everything you need to get started. 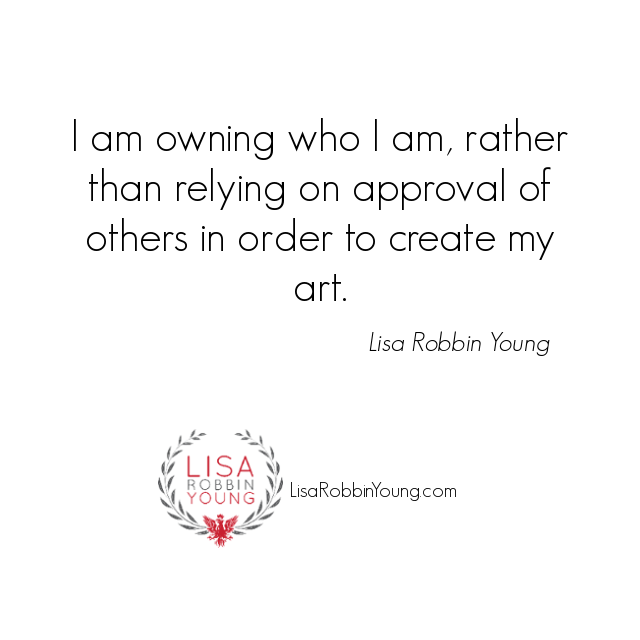 Uncommon. Enthusiasm. "Brave" was the theme for 2012 and in 2013, I chose to "Inspire". This year was about "Divine Alignment" - and there was a lot of re-alignment happening. Every year for half a decade now, I've intentionally chosen a "theme" and a "theme song" to set the tone for my year - both personally and […]

A couple of years ago, I was hired on as the Marketing Director at Heart of Business. It didn't last long, and yet a whole bunch of great learning came out of it (for all of us!). Mark Silver, the founder, and I developed a stronger friendship and keep respect for what we each bring […]