[Note: This is Day 10 in the Be Your Own Guru blog series. And this is about the time when people start to feel overwhelmed, "behind" or they just feel like quitting in general. Is that you? If so, read on!]

There comes a point on every journey where you need to decide if you're going to stand up for what you say you believe, or quit.

"It's when things seem hardest that you must not quit." is the closing line of Whittier's famed poem "Don't Quit."

Most of the time, actually.

See, there's a relief that comes in quitting... in letting something unravel so that you can walk away.

Maybe, like me, it's more than one of those things - or all of them at the same time. I've let things unravel a few times in my life. I moved across country when things were too lonely at college. I moved back home, cross country again, when things got too hard and lonely out West. Each time, I left stuff behind for other people to clean up. And don't get me started on the number of houses I've moved out of since I've been back in Michigan. I've left plenty of things behind I wasn't willing to deal with anymore. It was just to much/overwhelming/hard for me to sift through all those old things/memories, and decide what to keep. So I just let it all go.

I've even done it with a business or two. It got too hard. My heart wasn't in it. I was looking for relief.

But now, I'm standing in a space where hard is pressing in on all sides, and it's the kind of hard that tests my mettle. It's a situation (several, actually), where I've been called on the carpet and my beliefs are being put to the test. If I really believe in what I say I believe in, I must behave in a certain way, otherwise, I'm just paying lip service to what I say is my truth.

This is when things get HARD!

Shoot! It's even hard to just quit - I mean you've already invested a ton of time, energy, money, patience, attention, etc into this thing/person/relationship/commitment/business/etc.

Not to mention the "head drama" from your inner critic about what people will think/feel/say about you because of your decision.

That just makes it harder, no?

When things unravel, it's time for a new decision...

Look, you've come this far on your journey. You're hitting up against what Seth Godin calls "The Dip" - and maybe it's not the first time you've hit it. This is the point where mentors and coaches like to say "If it were easy, everyone would do it!"

And you've got a choice to make.

Do you keep working, sweating, laboring and pushing through on this thing to get through the Dip, or do you quit?

This is where you stand, staring down the lonely crossroads and ask yourself this important question:

Am I really committed to what I believe in, or am I ready to walk away?

Let's get a quick refresher on what "commitment" looks like: 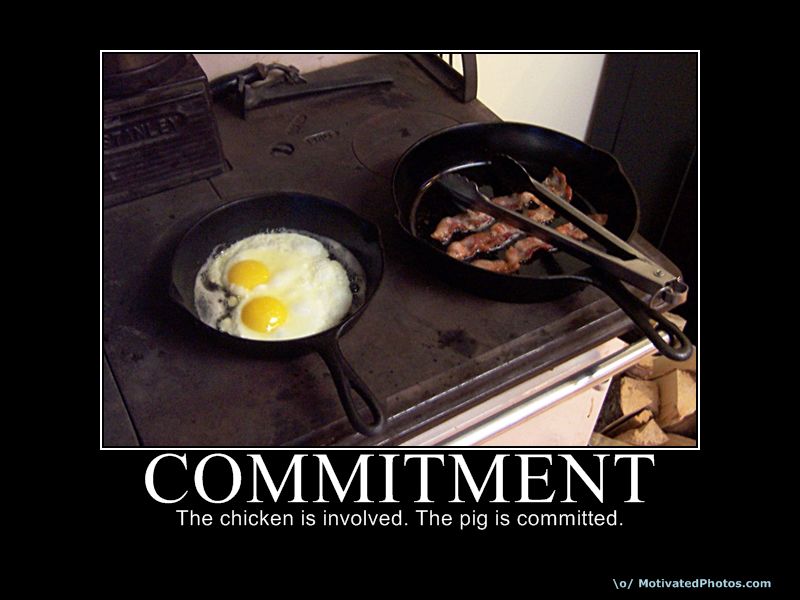 If you're involved, but not committed to repairing what's unraveling, then by all means, call it quits. But if you're committed, then you need to do what Dave suggested on Day 8, when he quoted Suzuki. Burn yourself up, baby. 'Til there's nothing left.

That's what giving your all really means.

Maybe that sounds morbid, but is there any other way to fully live?

It's also perfectly okay to say "What I thought I believe isn't what I really believe. So I'm choosing to let go of what I've been holding onto all this time. It's time to let go."

Think about it. What in your life would you truly give yourself over to completely? What are you willing to die for? Is it your family? Your cause? Your business (or the mission of your business)? Something else? Nothing at all?

This is a matter of priorities. If you're spending countless hours every week, marking time for "The Man" while your undeniable gifts lie languishing. We're all being robbed. You're missing out on the joy and potential monetary gain you could have, and we're missing out on how your gifts improve our lives. Where are your priorities?

So when you're seeking relief, by all means, quit.

But if you're standing on the shoulders of what you believe in, keep knitting that thing back together, no matter how many times it tried to unravel...

...at least, that is, until you don't believe in it anymore. In which case, you'll probably be looking for relief again. 🙂

[Note: This is the first in a series of what I hope will be daily video posts. I've got a lot on my mind, and writing feels too slow. We'll see how this "daily" thing goes, but today's eclipse gave me a bunch of ideas. Here's the first one. Enjoy!] Get Your Year In Gear […]